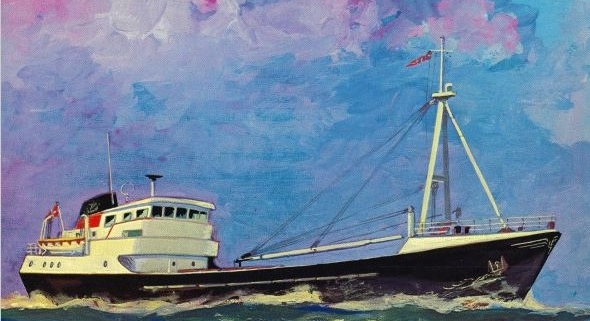 A painted full color artist impression of a singledeck coaster decorated the front page of our 1967 newsletter. This type of vessel became the Groninger ship par excellence from the early 1920s untill the mid-70s. The relatively small ships, with a loading capacity of 300-500 tonnes, could be built at the shipyards in the province of Groningen, where they slid sideways down from the slipway in the Winschoterdiep, Damsterdiep and Eemskanaal.

Many inland shippers in those early days felt the need to leave the inland waterways and use ships for bringing and picking up freight from Germany, Denmark and Sweden. From this need, ships were designed that were seaworthy but could also deliver cargo, as it were, to the door.

Due to their shallow draught, coasters could enter all small ports. The hinterland was also accessible via canals and rivers. In short, coasters were inland vessels and seaworthy vessels in one.

Containers appeared in the mid-70s

Many hundreds of Groningen coasters from that time were scrapped after spending their last years in Greek waters or in the Caribbean.
Conoship has remained active in the design of vessels for this trade throughout it’s lifetime. The size of the vessels increased, but the ideas remained the same; pragmatic and versatile vessels with low fuel consumption.

Below is the painted full color artist impression of a singledeck coaster by Frans Naerebout, which decorated the front page of our 1967 newsletter. 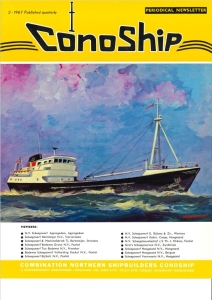 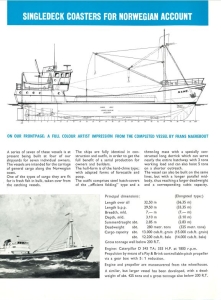