“The cooperation within Conoship also led to the members deciding to set up a joint workshop where shipbuilding steel could be centrally pre-finished. On April 13, 1973, Centraalstaal was established in Groningen. Here the construction drawings were made, after which all parts were coded in order to be cut by computer-controlled flame cutting machines. The shaping of plates and profiles was also carried out here, so that the shipyards received all parts completely pre-processed and coded as a kit per section.”

“Over the years, Centraalstaal has developed further and further and has become a renowned supplier in the shipbuilding industry, not only for its own members but also for various shipyards in the Netherlands and abroad.”

At a later stage, Central Industrie Group (C.I.G.) was set up, which includes various companies that carry out work related to shipbuilding or supply products. This concerns electrical installations,
installation of engine rooms, supply of ship’s equipment, etc.

In the heyday of tradeshows Conoship had some impressive exhibition booths.

A very memorable one is the Offshore Europe 77 exhibition in Edinburgh: “Conoship not only participated by means of a beautiful booth but drew extra attention by the – highly appreciated – gesture of donating 20,000 flower bulbs, as the exhibition press wrote: “in the hope of winning the hearts of the people of Aberdeen and the oil industry in this way”.

As we say in the Netherlands: ‘say it with flowers!’
The bulbs are in the white bags you can see in the picture below. 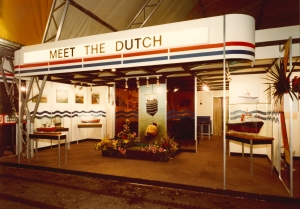 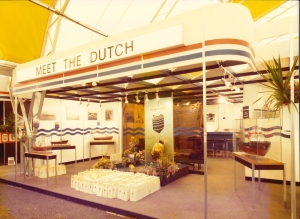